The Obama years: A modest start, Rezko and a historic White House bid 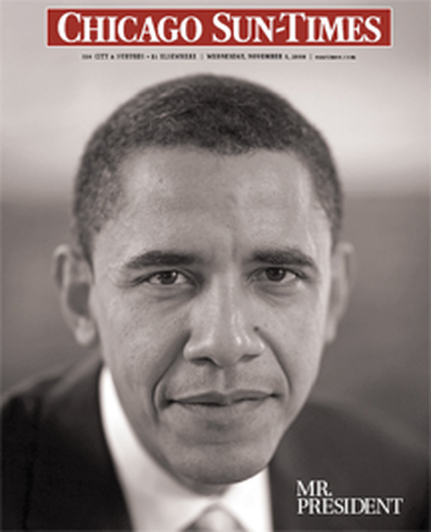 This is the James Smith-designed Sun-Times front page the day after Obama won the presidency in 2008. Its simplicity earned Smith an appearance on the "Oprah Winfrey Show."
When Barack Obama first arrived in the Illinois Senate, he toiled in obscurity. Republicans ran the chamber in 1997, making it difficult, if not impossible, for Democrats to pass anything of substance. Particularly a rookie lawmaker.

The first time I quoted Obama was in a June 1, 1997, story about Senate passage of a bill that tightened state welfare laws, but I remember when he got hazed two months earlier when he passed his first bill. It was a modest effort that would allow community colleges to publish the names of new graduates in a directory that would be distributed to potential employers.

The first question, asked jokingly of him, was how he pronounced his last name and whether it was Irish.

"It will be when I run countywide," Obama answered.

That was the first sign that the University of Chicago constitutional law professor might have loftier ambitions.

Obama stood out to me because he was quick-witted, articulate and well-educated in a caucus that veered toward hack-dom. One senator, for example, survived federal charges after the feds unearthed $35,000 in his deep freeze.

Obama, a practicing lawyer, did something that no one else of his ilk did in the General Assembly, including powerful House Speaker Michael Madigan, also a lawyer: provide a full list of the law clients he represented.

Soon, I would seek out Obama for sound bites on ethics-related issues, and we built a rapport -- so much so, at one point, I remember him asking me about the potential consequences of missing an important gun-control vote in December 1999 because he had scheduled a family vacation in Hawaii. I didn't offer him much in the way of advice. I didn't consider that to be my job.

But his own ethical judgment later came under serious scrutiny in a series of Sun-Times stories of which I had a role. Our work delved into his friendship and political ties to Antoin "Tony" Rezko, a now-convicted fundraiser and political fixer. Obama said he considered Rezko a "friend." I didn't hold Obama responsible for knowing that Rezko was committing crimes, but Obama's statement nonetheless said something significant to me about his judgment. Who we pick as friends says something about us.

While Obama never sought countywide office, he did run unsuccessfully for Congress in 2002 and then hit paydirt in 2004 in his bid to replace retiring Republican U.S. Sen. Peter Fitzgerald, a campaign I helped cover.

Obama's best-funded Democratic opponent, Blair Hull, dropped out of the race amid allegations he physically abused his ex-wife, tilting the primary Obama's direction. Then, as if political lightning were striking twice, Obama's wealthy GOP opponent in the general election, Jack Ryan, was felled by allegations he forced his ex to go to sex clubs. That left Obama to square off against the ill- and hastily conceived campaign of Alan Keyes, a GOP pariah if there ever was one.

In the months after Ryan's collapse, I witnessed how Obama, even in heavily Republican downstate Illinois, had become a political phenomenon. I accompanied him for a portion of a statewide tour in the week after his rousing, bust-out speech at the 2004 Democratic National Convention. I remember a brief encounter with Obama's wife, Michelle, who with their two daughters trailed behind in a rented motorhome that somehow couldn't go over 50 mph.

"You need to run for president in the next election," I quoted retired farmer Boyd Stenger telling Obama as he extended his hand to the candidate following a speech the then-state senator delivered to about 100 people in Arcola, Ill., a town known for its broom corn and nearby Amish population. Stenger was among several Republicans I interviewed who said they intended to vote for Obama.

Obama went on to trounce Keyes and served two years in the U.S. Senate before he began positioning himself for a possible presidential bid. But that's when he encountered fallout from the Justice Department's investigation into Rod Blagojevich's campaign apparatus and the department's indictment of Rezko, who also raised money for Obama.

In 2005, Obama purchased a strip of land Rezko owned next to Obama's Kenwood home, effectively enlarging the size of the then-senator's yard. The $104,500 transaction came when it was widely known Rezko was under criminal investigation.

In November 2006, I partnered in an exclusive, front-page story for the Sun-Times in which Obama expressed "regret" for the move, calling it a "mistake." Obama's tie to Rezko was a story that wasn't going away.

My byline appeared alongside several colleagues in another exclusive story about how Obama surfaced in the January 2008 indictment of Rezko. Federal prosecutors allege that $10,000, which was part of a kickback scheme Rezko orchestrated involving a firm that got state pension business, was donated by a Rezko associate to Obama's 2004 U.S. Senate campaign. Rezko was on Obama's senatorial finance committee.

Obama denied knowledge that the contribution might have been ill-gotten and donated $44,000 in Rezko-linked contributions to charity.

In March 2008, after his presidential primary opponent Hillary Clinton continued making Obama's links to Rezko an issue, Obama sat down with the Sun-Times editorial board to talk for the first time in depth about his ties to the indicted fundraiser and political fixer, a session I sat in on.

Later that year, Obama went on to defeat Clinton and Republican John McCain. I was the lead writer on Obama's August convention speech, his historic November 2008 campaign victory and his January 2009 inauguration.