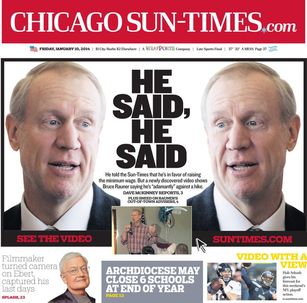 Whether to raise Illinois' $8.25-an-hour minimum wage was one of the 2014 campaign's defining issues. Former Gov. Pat Quinn promised to do that. The Republican who defeated him, Bruce Rauner, did, too.

My reporting was the first to chart how Rauner was really all over the map when it came to the question of how much Illinois' lowest-paid workers should earn.

First, in December 2013 as he was vying for the GOP nomination for governor, Rauner told a candidates forum in the Quad Cities that he favored rolling back the state's rate to the federal government's $7.25-an-hour mandate.

Facing political heat for that stance, Rauner then told me he actually would support raising the minimum wage --  a stance he reiterated during his State of the State speech in February 2015 -- so long as it was paired with business-friendly changes in state law.

Then, I was first to report on a September 2013 video, where Rauner told a Republican audience in downstate Illinois that he was "adamantly, adamantly" opposed to raising the minimum wage. Dramatizing his seeming inconsistencies, the front-page report carried this headline in the Sun-Times: "He said, he said."

Rauner later attributed his back-and-forth to two words: "my mistake."